I saw this on The Jetsons...

So this is what it's like to live in the future.

BTW, I have an urgent warning: do NOT apply the latest firmware upgrade to Rosie the Robot without first backing up all her preference files. I ran the installer immediately before my boss came over for dinner, with the result that Rosie dumped a pineapple upsidedown cake over Mr. Spacely's head. Consider yourself warned.
at 1:06 PM 2 comments:

What's that? You say the Japanese now use the word "hikikomori" to describe people who are basically like me?

And now sleep researchers have discovered even more people just like me in at least one crucial respect?

Believe it or not, this is one of my favorite buildings in the world.

The London Post Office Tower -- now the British Telecom Tower -- epitomizes the era of Swinging London. I already knew it from The Goodies ("Kitten Kong" uses it as a scratching post in their best-remembered episode) and Doctor Who (it was the villain's headquarters in "The War Machines") and the 1967 comedy "Smashing Time" (Rita Tushingham, Lynn Redgrave, and Michael York end up in the revolving restaurant that used to be at the top) before I saw it in person on my first visit to London in 1985.

What I didn't realize from film and television was how completely the tower dominates the London skyline. For newcomers like my starry-eyed younger self, it functions as a true landmark that helps orient them within the city in a way even the Empire State Building does not. More than any other structure, the sight of that tower means London to me.

This musing inspired by The World of Kane.
at 4:18 PM 2 comments:

Now on with the rant:

A few years back, Dick Clark voiced himself in the first episode of the cartoon show Futurama. To quote one of my favorite Futurama lines, after reading some of the comments otherwise intelligent people are making about Clark's appearance New Year's Eve, "I'm literally angry with rage!"

When a celebrity recovers from any other accident or horrific illness sufficiently to make a public appearance, he or she is hailed for bravery. No one would have dreamed of saying about the genuinely heroic Christopher Reeve, "he should stay out of sight until he can walk, or at least talk without the respirator." Anyone who said such a thing would rightly be deplored. But when it comes to surviving a stroke, it seems like anything goes.

I think what's going on here is that a lot of people are just plain terrified of strokes -- they strike without warning, often for no apparent reason, and can happen to anyone. This isn't something you can avoid by not smoking or avoiding risky activities like horseback riding. And in such terrible fear, people are willing to say "Just keep those poor victims out of sight! I don't want to be reminded that this can happen! Let them stay shut up inside someplace until they get better!"

Well, look, the thing is, stroke survivors get better by working at it, by returning to their lives, and by relearning the skills their bodies have forgotten how to do. What kind of message does it send to the millions of regular folks who aren't celebrities and have suffered strokes, when columnists feel free to treat a stroke as if it's something for the victim to be ashamed of?

I've seen stroke survivors quoted as saying they thought Clark's appearance was brave and even inspiring. I'm with them. I'm sorry if seeing someone doing a splendid job of recovery, speaking intelligibly with a clear mind, makes some newspaper guy squirm because he doesn't like to be reminded that sometimes bad things happen to people. That's just too damn bad.
at 1:47 PM No comments: 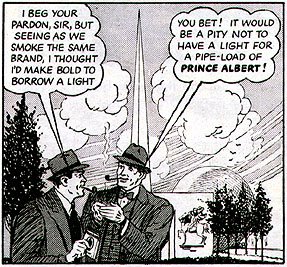 I understand 1939 was a very long time ago...but can you imagine a New Yorker ever saying "I thought I'd make bold to borrow a light"?

And may I add, the phrase "a pipe-load of Prince Albert" is the most disgusting euphemism for gay sex I've ever heard.
at 1:06 PM No comments: