If you're like me, and have wanted to donate to the fund to assist the family of the late Tom Artis, but are unable to write a cheque in U.S. funds, Tom Spurgeon has announced on the Comics Reporter that he is collecting PayPal funds for a single mass donation on Memorial Day.

More on Tom Artis from his friend and collaborator Peter B. Gillis here and here.

I can't afford a large donation myself, but being able to contribute even a small amount via PayPal lets me feel like I was able to do something. All the more so if mentioning it here can help encourage other people to chip in a tiny bit: maybe it all adds up. Tom Spurgeon says he's sending a check to the Artis family on Monday, so there's still time if anyone reading this also wants to join in.

I know what it's like to be at home as a full-time caregiver to a terminally ill family member. My situation wasn't comparable to the one Kim Artis and their children were in, or are in now...but when I think of how psychologically devastating it was, in addition to the simple material demands, I can only guess at how overwhelming it must be for the Artis family now, and how brave that woman has to be in facing these additional financial woes with two children to raise on her own.

I didn't know hardly anything about Tom Artis before he died: reading the reminiscences of Peter Gillis made me feel like I really missed something there. Here was a guy who loved the comics medium and chose to work in it despite considerable risk and little reward, and that makes us part of the same family. So I made the small donation I could manage, and encourage you to do the same.

Since "The Black Casebook" mentioned in Batman #665 has received favorable mention (here for instance) as an example of Grant Morrison refusing to throw away even the bizarre and goofy bits of Batman history, I thought it might be interesting to look at the little-known part of the Batcave where Bruce Wayne might store that particular volume. 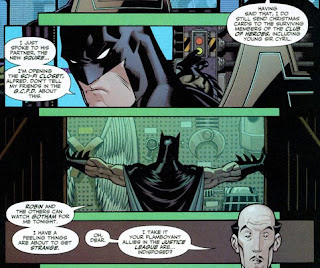 Let's have a closer look. He's got what appear to be Thanagarian police wings, he pulls out a Kirbyesque-looking "Boom Tube Gauntlet" for travelling through spacetime, and there are a few other items I can't identify but which look familiar...and oh yeah, over there on the right...

...Batman keeps a freaking Dalek in his "Sci-Fi Closet." Presumably captured during the Dalek Invasion of Gotham City. Which he stopped all by himself. Didn't even need a sonic screwdriver. That's how tough he is. Goofy wandering Time Lords are advised to stay out of his city.

Was this JLA story never reprinted? Why not, when it provides significant information on the backstory to Seven Soldiers?
at 4:11 PM 5 comments:

Congratulations are presumably in order

I have to fly to the UK this afternoon, for Alan Moore and Melinda Gebbie's wedding on Saturday. There's too much travelling involved in the next few weeks, especially when I just want to stay home and walk the dog and write before the madness of the summer, but this one trip I'm doing because I want to, and I'm looking forward to it. Alan says he's going to wear a blue bowler hat for the wedding, and frankly that's worth flying across the Atlantic to see.

It's always touching when pornographers get married, isn't it? No, I kid. I kid because I love pornography nearly as much as I love Moore's and Gebbie's comics.

The prospect of marriage has always seemed very strange and foreign to me -- I felt that way even when I was actually engaged and wondering what it would feel like to go through such an alien ritual, though as it happened I never did find out -- but I'm sure it's a lovely thing for them what are keen on it. And if Alan Moore or Melinda Gebbie were reading this blog, I'd offer them my best wishes.

New universes will be born from ours

Not a quote from the last issue of 52, but a headline from the New Scientist a few weeks ago:

What gruesome fate awaits our universe? Some physicists have argued that it is doomed to be ripped apart by runaway dark energy, while others think it is bouncing through an endless series of big bangs and big crunches. Now these two ideas are being combined to create another option, in which our universe ultimately shatters into billions of pieces, with each shard growing into a whole new universe.

Maybe this has happened already, and our universe is just one among of billions. Why should our universe occupy any privileged position of being the first and only, simply because we happen to be in this one? I'm just saying...

Parallel universes and alternate Earths have always been my favorite science fictional concept...all the more so since I started learning they had some scientific plausibility, or at least theoretical respectability: parallel universes have been well established in the fields of quantum physics and cosmology for the past century.

I first encountered the concept in The Flash #179, cover dated May 1968. Knocked into an alternate Earth where he exists only as a comic book character, the Flash visits Julie Schwartz at the offices of DC Comics, seeking his help to build a Cosmic Treadmill that will bring him back to his own Earth...itself a world where a man named Gardner Fox wrote comic books about a Flash named Jay Garrick, not Barry Allen. Then came Justice League of America #64, set entirely on Earth-2 and introduced the new Red Tornado to the Justice Society of America -- my first introduction to any of those characters. I was fascinated not because I found these new characters inherently more interesting than the JLA I'd already been reading about, but because these were counterparts to them. Not quite duplicates, but conceptual analogues. And then, just a month later, was Avengers Annual #2 in which the Avengers meet themselves from a parallel universe altered by the time machinations of the Scarlet Centurion.

These three comics came out within a span of five months, so I was getting a concentrated heavy dose of...um, "parallelism" there. And I developed a heavy bias for the kind of story that didn't just focus on the alternate history -- What if...Spartacus had flown a Piper Cub? What if...Joe McCarthy had become vice president? -- but that brought counterparts or alternates together, in which we see how the Northerner reacts to a world where the South never fell or you get to meet your own double from an alternate Earth. How do people react to learning that things aren't the way they are because that's the way they are and there's no alternative, and in fact things could have been very different?

Because I was so keen on this kind of story, I did a bit of reading on quantum physics, and discovered Schrodinger's mocking dismissal of parallel universes by putting an imaginary cat in an imaginary box and thereby making the cat even more imaginary, and thought that when Heidegger asked "Why is there something rather than nothing?" he might also have phrased it as "Why does one thing happen rather than another thing?"

So I always wondered why Marv Wolfman resorted to such extraordinary means to eliminate all those wonderful parallel Earths from DC Comics. The original concept had real science (well, scientific theory) behind it, but this new single DC Universe was a manifestly illogical and internally inconsistent construct. (For that matter, I'm still always a little bit thrown by the anal-retentive impulse in comics writing that says "I don't like this story element, so I'll devote huge amounts of time and energy to explaining it away and eliminating it so that no one else can use it" instead of, you know, just simply not using it in stories.) And now I wonder why the last issue of 52 had to employ such convoluted and baroque means to bring back those same universes, shoehorning it into the last issue...especially when Infinite Crisis teased us with the same reveal and then chickened out. I'd have been just as happy if Rip Hunter or someone turned up and said "No parallel universes? Are you nuts? They've been here all along! Oh, except for this weird vibrational anomaly that kept us from visiting them for the past few years. Fixed now!"

But whether by chance or by reading that same New Scientist article, the writers of 52 found the correct image of universes shattering into new ones, and that counts for something. The notion that there are only 52 of them is still unnecessarily constricting...but it can easily be ignored by subsequent writers, who can say very simply that the process doesn't end, that new variant universes must always be splitting off and forming all the time. The question comes down to "can we tell interesting stories?" rather than "how tidy does this look on somebody's wall chart?" and anything that increases the number of possibilities and options rather than decreasing them is a good thing.

Some readers may be welcoming back the multiple Earths because that's how things were when they started reading comics -- as I've said, there's a fair bit of that in me -- just as some folks may now be a bit peeved because they started reading DC comics since 1985 and this isn't the setup from their childhood. But I'm gonna say there's another reason to welcome this change, beyond mere nostalgia. It's the same reason I fell in love with the concept way back when, the same reason parallel universes and alternate histories fascinate me in real life: letting the tyranny of "this is how things are" be replaced by the possibility of "...and things are every other way too."