Just a few months shy of sixty years later, computer game expert and webcomic creator John Harris has set himself the task of blogging every single Peanuts strip starting with its debut on October 2, 1950. Along the way, John notes the evolution of character design, the early focus on characters other than good ol' Charlie Brown, the variable aging of the gang, the curious question of Snoopy's original ownership...and offers links to purchase those Fantagraphics collections with the gorgeous covers.

I first read these early strips in paperback collections published by Holt, Rinehart and Winston some twenty years after the fact. Most of us have never had the chance to see them one a day, as they were originally meant to be read in a daily newspaper, until now.
at 2:11 AM 3 comments:

The right man for the job 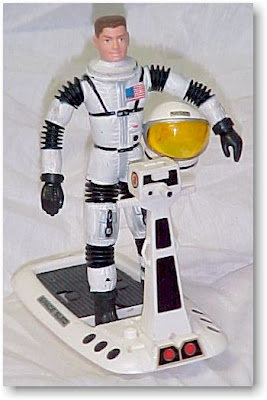 Universal will develop "Major Matt Mason," a live-action feature based on the vintage Mattel action figure. Pic will be developed as a star vehicle for Tom Hanks, and Graham Yost will write the script.

The toy line originated in 1966; Mason led an astronaut team that worked on the moon and lived in a space station. The toy was a hit in the buildup to the first manned moon mission. Mattel retired the line in the 1970s.

When Mattel execs Tim Kilpin and Barry Waldo came to Playtone for a meeting, they brought an arsenal of the Matt Mason figures. Hanks came armed with his own.

It might be difficult to convey how huge this is unless you were seven years old in 1969, in which case it doesn't require explanation. The toy line was iconic. I would ordinarily be pretty upset at the thought of someone unearthing a bit of my personal mythology and turning it into a Hollywood project all these years later. I mean to say, it's not like someone taking a book or comic you loved and turning it into a crappy film. It's more like someone stealing your favorite childhood toy and making you watch while he plays with it clumsily and breaks it. Right after taking twelve dollars from you.

However...if there's anyone in the world who could do this right, it's Tom Hanks. He might just pull it off and produce a film that conveys what space travel -- and space travel-based toys -- meant in the Sixties, up until we actually landed on the Moon. After that happened, it suddenly became boring and a waste of money and a distraction from the serious business of ending the war in Vietnam and campy and hopelessly naive and a relic of Cold War thinking. When it was no longer fantasy, nobody wanted to hear about space anymore (other than sad nerdy kids) and Major Matt Mason sales plummeted. But for a while there, this was the future.

(I do hope he puts in a female astronaut, though, because that's been waiting 40 years to happen. And Matt's space buddy Jeff Long damn well better be there too...)
at 1:35 AM 7 comments:

Changing as you can plainly see

My last couple of posts were a bit preachy and uptight, so I felt it might be nice to mellow things out with a rendition of my mother's favorite gospel song, as performed by Gail Farrell and Dick Dale on The Lawrence Welk Show:

This clip seems to be extremely popular on the You Tube, proving that it's useful for more than filthy double-entendres and adolescent smut. Interesting fact: the young men who wrote this song, Michael Brewer and Tom Shipley, were in London when this originally aired and never had a chance to see it for themselves until decades later.

And to prove cognitive dissonance can work in both directions, here's Patti Smith:

This one goes out to all my pals on the late scans_daily: 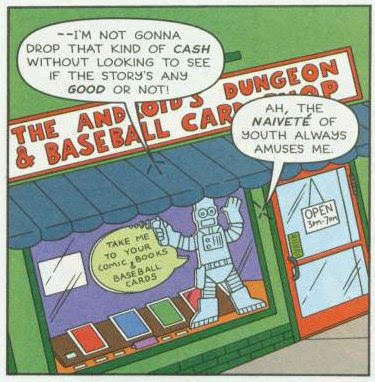 From Radioactive Man #100 (December 2000), script by Batton Lash, art by Bill Morrison and Steve Steere, Jr. Enjoy more from that issue here, if it doesn't completely blow your mind to read a few sample pages from a comic book for which you haven't actually paid yet. Warning: it might include eight year old spoilers!

I was too preoccupied by other things (and too darned angry) to post anything about the community's demise on this blog, though I posted some comments on the topic here and here. But that place was probably my favorite thing on the whole Internet and there are a few aspects of how it all went down that still totally bum me out.

Anyway, long live the new scans_daily and noscans_daily. And for those who cheer the end of the original community -- including those creators incapable of distinguishing between discussion and scholarship on the one hand and piracy on the other -- here's another panel: 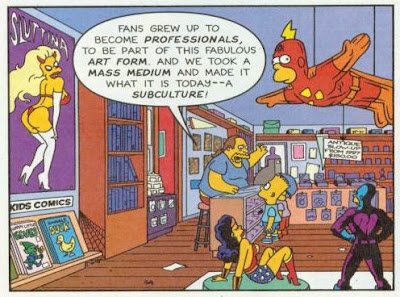