I've got to admit Amazon has a pretty good idea of my tastes and preferences. Those guys are great writers! 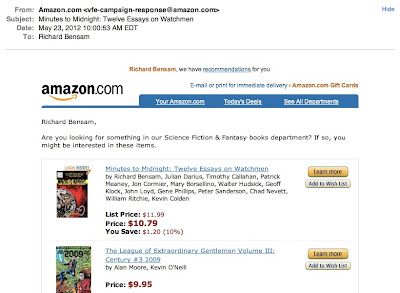 I was a little preoccupied when this went up on Kickstarter so I'm only just getting around to mentioning it now. A few years back I wrote the scripts for a six issue miniseries called The 1000 Year Night from a plot by the ever-enterprising Quenton Shaw. Quenton describes the story in convenient Hollywood shorthand as "Interview with a Vampire meets The Bourne Identity" and there's something to that. The capsule description may make it sound very familiar, but I can safely say we took that starting point in some unexpected directions. Unfortunately the economics of getting the book published didn't work out at the time, but now we have the option of raising funds via Kickstarter, not to mention considerably greater opportunities for digital distribution. I'd love to see the series appear after all this time. Check out the art samples at the link and see if your curiosity might be sufficiently piqued to chip in.

Also, since people have asked, I'm happy to say that both Minutes to Midnight: Twelve Essays on Watchmen (edited by yours truly) and Teenagers from the Future: Essays on the Legion of Super-Heroes (including "The Perfect Storm," my essay on the death and resurrection of Lightning Lad in Adventure Comics and what it signified about the development of superhero comics in the Silver Age) are now available for the Kindle. Now at last we're all set for that post-Before Watchmen surge of interest in anything Watchmen-related!

Finally, I just signed up on Twitter. I guess that means it's officially over now, right? You're probably all rushing over to Pinterest as I type this. Ah well. I'll probably just hang back for a while until I figure out how everything works. If anyone wants to go ahead and follow me and be followed back, I can pretty much guarantee you won't be overwhelmed by incoming messages from me. I won't twitter bomb you or whatever the kids call it. You'll hardly even notice I'm there.