They got the guns but we got the numbers 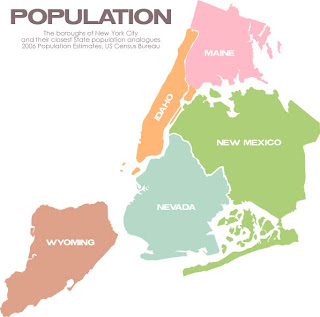 Found on Gothamist, this map illustrates the sheer number of people living in each borough of New York City by comparison with an entire state of the U.S. of similar population size. For instance, the estimated population of Maine in the year 2007 was 1,317,207; the population of the Bronx the same year was 1,373,659. The above map uses estimates from 2006, but the principle is the same.

And I can get to all these places by subway except for the island of Wyoming, but the ferry there is free.
at 2:10 AM 3 comments:

And we're out of beta, we're releasing on time 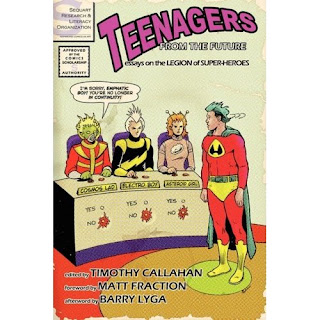 Teenagers From The Future, the anthology of essays about the Legion of Super-Heroes edited by Tim Callahan and published by Sequart Research and Literacy Organization, is now available from Amazon.

The book includes my essay "The Perfect Storm: The Death and Resurrection of Lightning Lad" about the early days of the Legion series. The particular storyline I examine is one of the first examples of a multi-issue "story arc" in superhero comics (I also mention a few precursors) as well as an early instance of the "death as a revolving door" motif which has since become a staple of comics as well as other serialized entertainment. All this and a tribute to the great Jerry Siegel, plus a comparison of the different working relationships he and his successor Edmond Hamilton had with their editor, the controversial Mort Weisinger. And even though that seems like it should be enough for one book, this particular volume comes with seventeen other essays at no additional cost, written by...um, a bunch of other people who I'm sure have interesting things to say too. Whatever.

(I'm kidding, of course -- I've read this entire book several times in painstaking detail and I'm proud to be one small part of it. Also, this year is the fiftieth anniversary of the first appearance of the Legion of Super-Heroes, and it means a lot to be able to participate in commemorating that.)

According to Tim, the book will also be available for order through the direct market in either the October or November Diamond Previews catalog. Tim isn't sure whether the book will still be available through Amazon after it appears in the Diamond catalog, so anyone who wants to be sure of getting a copy without actually going into a comics shop should probably order it now.