As ever, birthday greetings on this unusually fine day to Adam at The Blue Meanies Are Coming! and Becca at No Smoking in the Skull Cave. May the birthday elves leave every gift you want underneath the birthday tree...while birthday revelers dressed in their traditional costumes as Katy Perry, James Carville, and Helen Reddy knock on your door to offer you birthday candy and treats…and in the evening, birthday fireworks light up the skies and make your neighbors gasp in surprise and cheer the anniversary of your birth. Or however you do the whole birthday thing where you are.

How interesting that two of my favorite bloggers just happen to have birthdays on the same day. I mean, what are the odds?

For me, it's the day I apologize yet again to my mother for having caused her inconvenience one day many years ago. But as she points out, she didn't have anything better to do that day.
at 12:51 AM 1 comment: 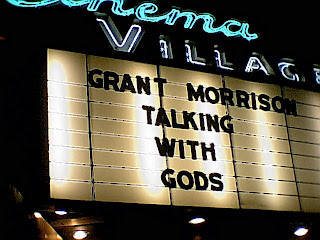 photo by Rich Johnston
I feel a bit funny here without my initials -- they've been with me so long -- but it was time to let them go. They served their purpose, and I was getting uncomfortable with people actually calling me "Rab" (or sometimes, strangely, "Rob") in real life. It's time people know me not merely as an acronym but as the fellow who edited that book, and then that other book, and then wrote a book, and that comic that never came out and another one that did a long time ago.

Anyway, so yeah…NYCC 2010 went by in a blur of about ninety million people. That's the figure they announced, right? I'm prepared to believe it. For the first time, I feel like I missed a convention while actually attending it, mainly because the crowds kept you from walking the show floor freely. Most of my time wound up spent behind the Sequart table, plus an excursion to the world premiere screening of Grant Morrison: Talking With Gods on Saturday evening and helping out at the Q&A session for the film at the con the following day. If you were there at the convention panel, did you notice how the lights went off when they showed clips from the film and back on when they were done? That was me. Pushing the light switch.

I still maintain a table can be the best way to see a convention -- just stand there and let everyone come to you -- but this time it didn't work as well. I hate to say this, it really goes against the grain philosophically to sound elitist…but NYCC may have to consider adding a fourth day, and making that extra day for industry and trade people, including librarians and teachers and press. For people who are working during the con, those early hours on Friday before the doors open to the public might end up being the only chance they have to see the rest of the con (as it was for me). And really, the definition of "professional industry person" is becoming so diffuse, it's not so elitist as it might once have been. It still rankles to make the suggestion. I come out sounding like the guy who's just got in, trying to pull the ladder up behind him. But it may have to happen.

Overall, Sequart had a really good con, including the aforementioned film debut. The company launched two books at the con, my own Minutes to Midnight: Twelve Essays on Watchmen and a pre-release convention beta edition of the Gotham City 14 Miles anthology. Both sold out during the con. The Watchmen book sold out before the first day was over. The copies that Sequart expected to last the entire three days of the con went in less than a day. Finally we had to reserve two copies as display copies marked "sold out, please order online" so that prospective customers would have something to pick up and flip through at the table. And we did have people saying they'd come looking for the Sequart table specifically because they'd heard of this book and wanted to buy it. Amazing.

One factor that may have fed demand was a curious gap or omission I noticed at the con. Last year NYCC took place just before the Watchmen film opened, so the merchandise was everywhere. Toys, costumes, the works. This time, virtually no new Watchmen merchandise to be found. One costume merchant was selling Rorschach-style fedoras, with accompanying mask; you could find action figures at a steep discount. Not much else. Surely people didn't stop liking Watchmen just because the movie came and went? Having liked it for 25 years already? But that's how media marketing works. This time, because no one had any motive to generate false demand for it, Sequart had the market cornered for people who genuinely still wanted to know about Watchmen.

(If you're also one of those folks, Minutes to Midnight is not yet listed on Amazon but is now available on Lulu. I'll be sure to mention it when the Amazon link arrives.)

At the con, we also worked out what my next two projects for Sequart are going to be, so I've got a nicely packed schedule over the next several months. More as this story develops…
at 11:59 PM 2 comments: