I couldn't quite bring myself to become immersed in childhood memories* by watching old tv episodes this evening, so I spent an hour watching this excellent documentary from 2000 I'd never seen before and it cheered me up immensely. They've left quite a few things out for time reasons, and some of the omissions leave a false impression about the sequence of events if you're a hardcore fan and already know the chronology…but this really conveys the spirit of the shows and how popular they were. It may help explain how some people think of Gerry Anderson the way people of other generations might think of Walt Disney or George Lucas.

All four parts embedded below for your viewing convenience. Enjoy!

* If you know anything at all about me, you know this statement is the equivalent of a fish saying "I didn't especially feel like getting wet tonight."
at 2:23 AM 1 comment: 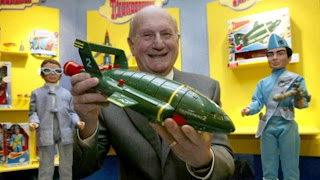 Stingray and Thunderbirds were my first favorite things, and Gerry Anderson was my first favorite creator. Those shows did so much to shape my earliest feelings of adventure and imagination and heroism. I know he was in a bad way for a while and I’m glad he’s at peace now. But a world that never had Gerry Anderson in it isn’t a world I would recognize.
at 1:49 PM 1 comment:

Submarines of your dreams

I have to admit, I had my qualms about the world ending…but now that it’s done, a huge weight has been lifted off all our shoulders. Whew! All the pressure is off! Here’s the song that best expresses my sense of relief.

In 1957 a Russian director named Pavel Klushantsev made a science fiction film called Doroga k Zvezdam, or Road to the Stars. It's amazing. As far as I can tell from my position of not speaking Russian, the film was a kind of fictionalized documentary about the future of human space exploration, much like the 1955 film Man and the Moon directed by Ward Kimball for Walt Disney. Yet Klushantsev went far beyond any other filmmaker of the time in the cinematic ambition and scientific accuracy of his predictions.

All the clips from this film on YouTube are worth watching, but this particular segment includes some of the most striking "no way was this made a decade before 2001: A Space Odyssey" moments. Bear in mind this film was made even before the launch of Sputnik!

I definitely see a lot of stuff in these clips using the same visual motifs and techniques and special effects methods used in 2001, and a few things the later film didn't even try to do. The blatant visual similarities have made some people suspect Stanley Kubrick must have seen Road to the Stars while doing research for his film, but it could also be a case of convergent evolution.

More details and links about Road to the Stars here. And a tip of the hat to John Sisson at Dreams of Space for posting about a Czech children's book on space travel which seems to have been inspired by Klushantsev's visionary film.