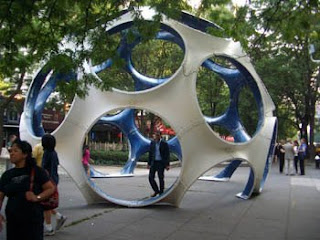 I was only peripherally aware of Buckminster Fuller for all these years, but in recent months I've become a bit of a fan and suddenly, as if in reply to my vague stirring of interest, he's everywhere. Really, don't you think it's time we gave the Dymaxion car another shot?

In a pleasing coincidence, a Fuller dome has been constructed near my home on the very week I'm heading off to visit another dome that has a special place in my heart. In other words, it's time once again for this blog to enter a state of hibernative naptosis while I go off to recover from the first half of this year. I will be travelling with geeks, but I won't be checking my e-mail often (if at all) or keeping up with my favorite blogs while I'm in retreat, so try not to ask me anything or say anything interesting while I'm gone.

People we couldn't do without

Strangely enough, the vast majority of search engine traffic arriving at this blog comes from people searching on Google for the origin of the phrase "Everything was beautiful and nothing hurt." For the benefit of anyone who arrives at this entry looking for the same information, those words are written on the tombstone of Billy Pilgrim in the novel Slaughterhouse Five by Kurt Vonnegut, and they appear again on Stony Stevenson's tombstone in a television program called Between Time and Timbuktu which adapted scenarios taken from an assortment of Vonnegut's novels and short stories. As I describe it at the above-mentioned link, seeing that program at an impressionable age was a major formative influence on me.

When I was writing about Steve Gerber, I wish it had occurred to me to call him "the George Carlin of comics" because in some respects that's exactly what he was. (Fortunately the same comparison occurred to Jim McLauchlin of the HERO Initiative, so at least the world was not denied this insight due to my mental slowness.) Of course Gerber and Carlin and Vonnegut were radically different in a lot of ways -- perhaps more ways than they were similar -- but they occupied the same continuum of thought and embodied the same outlook. Devastatingly intelligent, viciously funny, outspokenly skeptical, fiercely enraged by stupidity and hypocrisy, able to see the humor in our vanity even as they watched the human race needlessly destroying itself. These are qualities I've always wanted to possess...especially that last one, because finding the humor in disaster is a necessary survival skill and it's getting harder and harder all the time. I listened to what all three of them said and read what they wrote and always hoped they'd give us still more clues on how to get by. And now these three of my lifelong icons are gone in the span of a little more than a year.

Oh, and one other: although I never met him, I had a tenuous family connection of a sort with Algis Budrys and was a huge fan of his work, especially the novels Who? (made into a very good movie with Elliot Gould and Joe Bova) and the astonishingly prescient yet criminally out-of-print Michaelmas. Carlin, Gerber, and Vonnegut all saw America from the inside; Budrys arrived in this country in 1936 as the five year old son of the ousted consul-general of Lithuania and he never forgot those inexplicable childhood glimpses of Nazi insanity that caused his family to flee their home.

In some ways the immigrant learns a new culture more thoroughly from the outside than the native ever knows it from inside. If you learn a second language, you may be more conscious of its formal rules of grammar and its odd linguistic quirks than you are of your first tongue; you might speak the language more correctly than a native because of all the things they can take for granted that you had to acquire through hard study. In most ways Budrys lived as the perfect assimilated American immigrant, but inside (he would later say) he never lost sight of the fact that friends and neighbors and community were essentially werewolves -- capable of transforming from kind, reasonable people to bloodthirsty monsters given the wrong impetus.

Now that makes two more people who were huge personal icons of mine gone away this year. If you'll excuse me being so self-centered about this, it does feel meaningful: as if something is being stripped away, as if the world is being diminished around us. More so than usual, I mean. And I had a brush with serious illness at the start of this year, and then my mother did, and then I nearly lost one of my best friends, and I did lose another who meant a lot to me. So I really don't want to write any more memorial posts. From now on, nobody I like die, okay?
at 1:51 AM 2 comments:

I need someone to tell me this is a hoax. Hmm, the Telegraph, that's like a British version of the Onion, isn't it? It just does gag stories and satire that aren't meant to be taken as fact, right? Whew, that's a relief! Because this actually being true would have made me sick as a parrot. A dead parrot.

Also, I was literally three blocks away while this was happening, and I had no clue.
at 1:51 AM 1 comment:

At the behest of sean, who bade me answer the following:

List seven songs you are into right now. No matter what the genre, whether they have words, or even if they’re not any good, but they must be songs you’re really enjoying now, shaping your spring. Post these instructions in your blog along with your 7 songs. Then tag 7 other people to see what they’re listening to.

Feist, One Evening -- The tune from the iPod commercial that made her reputation in the States didn't grab me...but it led to her back catalogue getting more exposure here, and when I heard this it pleased me in all the ways the better-known song didn't. Enjoy the video directed by Leslie herself and costarring her fellow Nova Scotia music sensation Buck 65 here. (Edit: damn you anyway, sean, you know everything takes me longer because I'm so old! I was just getting to this!)

Broadcast, Come On Let's Go -- What if the BBC Radiophonic Workshop were taken over by the Lloigor from Zenith to become a pop group in Swinging London circa 1967 and wrote the missing love song from the soundtrack of Billion Dollar Brain? It would sound like this.

The Jigsaw Seen, Baby Elephant Walk -- You'll recall their gorgeous cover of the Scott Walker tune "30 Century Man" on the soundtrack of Bender's Big Score. This is another track from the same album, Songs Mama Used To Sing. (The album also includes a peppy version of "Tattoo" by the Oo.) Video here.

Donovan, Barabajagal -- Jeff Beck on lead guitar, Ron Wood on bass, Nicky Hopkins on piano, and Micky Waller (who just passed away a few months ago) on drums. Wikipedia claims no less than Robert Plant also helped on backing vocals, but I'm not sure about that. People might think of Donovan as the folkie tunesmith with the Dylan cap who introduced the Beatles to the Maharishi, but he's also the guy who recorded songs like this and did backing vocals for Alice Cooper a bit later. Set to images here.

Spanky and Our Gang, Like To Get To Know You -- Looks like I've fallen into a 1967 groove here. This may seem very much of its time to modern ears, from the days of The Mamas and the Papas and the 5th Dimension, but the truth is this was pretty unconventional even then. Check out this vintage performance clip from the Smothers Comedy Brothers Hour.

Rench presents Gangstagrass, Pistol Packin -- Speaking of crossing genres! I've been waiting years for someone to do this, but I didn't expect it to be so awesome. Listen to this and three other tracks here or download the whole album for free here.

I just don't feel like tagging anyone, but consider yourself tagged if you wish to be and haven't been tagged by someone else.
at 2:58 AM 6 comments:

The road to oranges and lemons

While promoting one of my favorite albums by one of my favorite bands, said favorite band (XTC) demonstrates their willingness to commit career suicide and gives new meaning to the act of burning one's bridges while still crossing them. In other words, it's brilliant. For some reason it also puts me in mind of Joel Hodgson...
at 4:57 PM 2 comments:

And doing a good job of it too? Gerry Conway.

No, not the drummer from Jethro Tull, Steeleye Span, and Fairport Convention. This one is the former EIC of Marvel Comics and onetime writer of Daredevil, Iron Man, Thor, Fantastic Four, Avengers, Justice League of America, Batman and Legion of Super-Heroes and apparently several hundred other comics I bought and read during the 1970s. Creator of Firestorm and Ms. Marvel. Author of Superman vs. the Amazing Spider-Man. The guy who killed Gwen Stacy. Also he's written some things for television. That Gerry Conway.

One of the strange benefits of the interwebs and this blogging stuff in particular has been encountering people who loomed large in my personal mythology many years -- decades! -- ago, and seeing them now in an entirely different light as regular folks instead of impossibly distant icons of comicdom. It's happened to me a number of times now and it never gets less strange. This particular guy was a major figure in my past, especially during the time he returned to DC Comics as a writer/editor and spawned new characters and series like mad, in what seemed at the time like a bid to make him the next Stan Lee. It didn't quite work out that way, but he was a huge part of the comics conversation of the era. Now, far removed from the hype of those days, he turns out to be a thoughtful and lucid commentator.

Well, unless this is another one of those Fake Stan Lee deals. In which case I look pretty stupid now.