Okay, maybe All-Star Superman #4 is the best Superman comic to be published in nearly twenty years...but well before that, Jimmy and his best pal were exploring tripped-out psychedelic landscapes alongside the Hairies and the Newsboy Legion, courtesy of Jack Kirby: 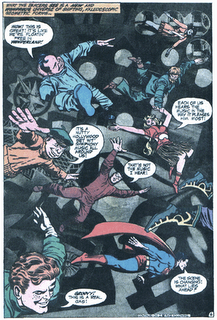 (From Superman's Pal Jimmy Olsen #137, one of my favorite comics of all time.)

You'll definitely want to check out more about this here.
at 1:41 AM 5 comments:

Every time a bell rings, an angel gets his...oh, never mind

Apparently, back in the old days of Hollywood, they knew how to conduct a proper job interview. Like this:

Movie great JAMES STEWART was forced to prove he wasn't gay by bedding two hookers, according to an explosive new biography. Movie mogul LOUIS B MAYER reportedly instructed the IT'S A WONDERFUL LIFE star to prove to him he wasn't a homosexual before offering him a film deal, sending the actor off to find a couple of prostitutes. The shocking claim is made by MARC ELIOT in his new tome JIMMY STEWART - A BIOGRAPHY, which is set to hit bookshelves this autumn. Eliot claims Meyer demanded Stewart prove he wasn't gay by visiting a Hollywood brothel and bedding "at least two of those broads".

I wonder if this was the inspiration for The Cheyenne Social Club? Nah, probably not.
at 4:02 PM No comments:

Then we'll get to work on that big ball of garbage headed for Earth...

A new installment of Futurama with two of my favorite characters from the show...

That's it, I'm taking your comics away

From the New York Times:

You'll all get your comic books back when you can promise me you'll behave. But first I want you people to think about what you've done. Your mother and I are both very disappointed in you.
at 12:18 AM 7 comments:

A rant, in which I respectfully disagree with Kalinara on a topic that is of no personal significance to me whatsoever, but that touches on matters I think about a lot.

Most of the time I talk about comics on this blog...but I know some of you aren't actually comics readers, so first a quick summary to bring everyone up to speed. DC Comics has a character named Nightwing, more about whom shortly. Also, DC Comics recently published a godawful series called Infinite Crisis in which the very foundations of the DC superhero universe were shaken and the continuity of their books rearranged to make them new and exciting again. If that wasn't enough excitement, Infinite Crisis was preceded by a bunch of mini-series all leading into the main event, and its aftermath involves all the DC titles jumping forward in time to "One Year Later" -- in which time dramatic changes have come to various characters, for example: Green Arrow is now the mayor of Star City! But how did this come about? -- and a year long weekly comic series called 52 which discloses the events of the "missing year" during which Superman, Batman, and Wonder Woman all took a simultaneous twelve month sabbatical. All clear? Okay. You don't need to remember any of that.

Now, at the Wizard World convention in Philadephia, DC Vice President and Executive Editor Dan Didio revealed that one of his hopes for Infinite Crisis had been killing off the character Nightwing...who is none other than Dick Grayson, formerly Batman's sidekick Robin. However, Nightwing got a reprieve from higher up, and is still alive.

Robin/Nightwing has a considerable fan following, and a lot of that fandom feels that his comic totally blows. Kalinara, a very astute reader whose opinions I always enjoy, opines that the character is irredeemably broken due to writer mishandling, and that killing him off would have been the best choice. She makes a strong case based on the significance his death would have had in the continuity, and how other characters would respond. Very sensible stuff...and yet, I disagree.

Virtually every reference I've seen to what's wrong with Nightwing, or killing off Dick Grayson as a good or bad thing, or how much a segment of fans liked him in Teen Titans, has been based on hardcore fan reference points and continuity debates...and totally missing a larger aspect in the real world outside of comics.

I've never read an issue of any Nightwing solo comic. I read maybe the first six or seven issues of the Teen Titans comic by Marv Wolfman and George Perez, and none since then. I don't know a damn thing about the character or his development over the years. But I do know that an astonishingly large percentage of the world's population knows who Batman and Robin are, and that a considerable subgroup of same knows that they're Bruce Wayne and Dick Grayson. If you said to these people "Robin grew up to work on his own, apart from Batman, and now calls himself Nightwing" that premise is totally accessible and immediately understandable. Any comic publisher that wanted to hook an audience -- instead of servicing the continuity-based minutiae known only to an ever-diminishing of insiders -- would be complete and utter fools to throw away something with that level of audience recognition.

If there were a Nightwing movie or television show, all the reviews and listings would have to say is "the adventures of Batman's former partner Robin, now grown up and on his own," and boom! -- everyone would be on the same page. Do comics fans really not see how valuable that is? To say "Oh, but the character is broken, we have no way to tell a good story about him anymore" is completely missing how the act of writing fiction works.

As I say, I have only the astute comments of folks like Kalinara and Vince Murphy to indicate the ways in which Nightwing has been poorly handled; I assume these are accurate descriptions. But all that's needed to remedy these faults is a proper writer, one who can say: "What's the premise of this character? Oh yeah, the whole grown-up Robin thing. Right, so he was a boy acrobat whose parents were killed, trained by the World's Greatest Detective in crime fighting. But he's different from Batman, because he had a mentor instead of being alone since boyhood. So he's as tough and competent as Batman, but with a warmer human side. And he's known all the other heroes since he was a kid. They don't hold any mystique for him; he's seen it all...and anyway, Batman's the best. So what happens when..."

And suddenly, you're telling stories. See how that works? Writers who are obsessed with continuity points at the expense of telling stories have their heads, and there's no other way of saying this, shoved into their own asses.

Now here's the question that's been driving me nuts. If Nightwing was doing so poorly that the Vice President and Executive Editor of DC Comics wanted to kill him off...why is DC still publishing a Nightwing comic? You don't have to kill off the character, just stop publishing the damn comic and give him a rest. But if the comic is selling well enough to keep going...why the hell was this guy trying to have him killed off?

If you can wrap your head around this...if you can answer those questions...you understand the world of comics better than I do.
at 4:47 PM 9 comments:

I hope we'll have no more complaints about this:

Organizers note that the upstairs location can accommodate twice as many exhibitors and many of the aisles will also be twice as wide which will afford easy access for the many attendees. The lobby, which also houses the registration area, will be five times bigger than the lobby in ’06 and there will be twice as many registration counters. There will also be longer show hours, two entrances to the show floor, and separate registration lines for pre-registration and on-site ticket purchases. In addition, exhibitor and professional badges will be mailed in advance this year eliminating an estimated 8,000 badge “pick ups” in the registration area just before the show.

So I've got karaoke this weekend and a convention next February. I'll try to fill in the nine months between the two as best I can.
at 4:46 PM 4 comments: