This was my mother's actual response to news that the first day of the Republican Convention might be postponed or curtailed due to Hurricane Gustav:

"I just hope the men's restrooms in St. Paul are prepared for all those Republican delegates with nothing to do..."

See? Now you know where I got my crass sense of humor.

The whole thing is a blessing in disguise for the RNC. The last thing Republican strategists wanted at the convention was to have those high-profile appearances by Bush and Cheney -- reminding everyone yet again how closely tied McCain is to the staggeringly unpopular incumbent -- but there was no way to exclude them from appearing without it being noticed and remarked upon. Now those speeches can be cancelled altogether without it looking like a sign of embarassment.

Plus McCain and Palin now get an opportunity to rush to the Gulf Coast for a photo op that will make them look presidential. It's like McCain received a special blessing from above in return for picking a running mate so beloved by Christian conservatives.

On the other hand, Focus on the Family may not be able to savor this victory, as they'll be preoccupied with filing a breach of contract suit against the Almighty for utterly failing to live up to their demands. Whose side is that guy on, anyway?
at 8:06 PM 2 comments: 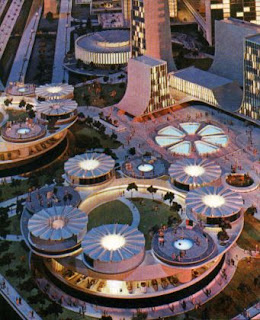 When I was seven years old, one of my most prized possessions was a book called The World of Tomorrow written by Kenneth K. Goldstein and published by McGraw-Hill. (Miraculously, I still own that book today, and it's still one of my most prized possessions.) As the title indicates, this was a book about the future, lavishly illustrated with gorgeous full-color photographs of life in the year 2069. 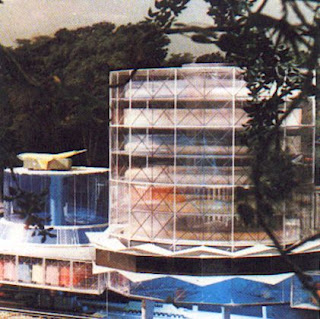 You wouldn't believe how many hours I spent staring at those photos when I was seven. Well, actually, maybe you would. It was so authoritative: these were detailed photographs, not merely drawings created by some artist, so any reasonable person could only assume this was how the future was actually going to be. I tried to put myself into the world of those pictures to better understand how the future would feel to live in at ground level. What would it be like to walk down that street? What view would you see from that park? What sounds would you hear from the traffic of those automated cars zipping by on their grooved tracks? How would it feel to ride in one? Were those rosette-like buildings carousels or restaurants? Would it be strange to sleep in an underwater hotel? 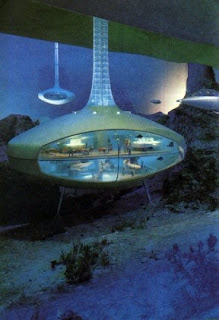 Because of all those hours staring and contemplating, these images are still the indelible default setting for "the future" in my imagination. This is still the future cityscape I envision when reading a science fiction novel. It's the utopian future Earth of Star Trek; the three-dimensional version of what Curt Swan drew in old issues of Adventure Comics with the Legion of Super-Heroes.

It turns out the photos in The World of Tomorrow actually came from the Futurama II exhibit presented by General Motors at the 1964 New York World's Fair, the very building I wrote about in my previous post. (The original Futurama was presented by GM at the 1939 World's Fair.) Neither the corporate connection nor the association with the World's Fair were highlighted in any way by Goldstein or singled out in the acknowledgements. The book was published several years after the fair closed, in which time a lot had changed in America...and the surprisingly progressive, socially conscious, and environmentally enlightened text wasn't a commercial sop to the automaker. As a result, I went a decades not ever guessing the connection until I came across the familiar pictures by accident a couple of years ago while researching something else.

And now, because we live in the future -- where this home computer terminal I'm using at the moment is connected to a worldwide communications network -- I can share with you something I never dreamed existed: actual motion picture footage of that other future I kept trying to visit throughout my childhood.

Note: the above scans were found at nywf64.com, which offers a thorough guide to Futurama II among other attractions.
at 1:58 AM 4 comments:

If you've only seen it once, you haven't seen it all

As a special treat for those who follow the exploits of the internationally famous super-scientist Dr. Thaddeus "Rusty" Venture and his clan, we present an actual photograph of their home and research headquarters, better known as the Venture Compound, circa 1964: 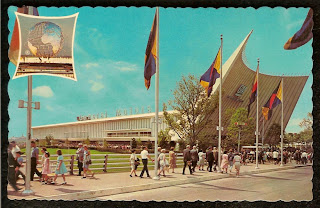 The above picture is the best quality photo I was able to find online after long hours of research. Because the flags and the throngs of tourists may obscure your view of the main building, we also offer an artist's conception depicting a wider angle, as seen in a postcard from the same era: 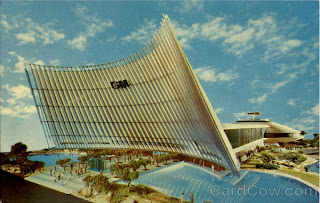 And this image from yet another angle clarifies the overall design of this impressive structure:

The unfamiliar corporate signage may seem puzzling, but this is easily explained. At the time these images were created, Dr. Jonas Venture leased his distinctive home and research center to the General Motors Corporation for use as their pavilion at the 1964 New York World's Fair in Flushing Meadows Corona Park in Queens, New York. General Motors used the complex for their Futurama exhibit, in which visitors seated in moving armchairs glided past detailed scenes depicting urban life as it would be lived in the early 21st Century. Futurama proved to be the most popular attraction of the World's Fair: nearly twenty-six million people took the journey into the future during the Fair's two year run.

I've visited the fairgrounds at Flushing Meadows many times, but no trace of the Venture Compound remains. I assume that, having made a tidy profit on the temporary use of his abode, Jonas Venture removed it from the site after the Fair ended and returned it once more to the remote location where it stands to this day. Courtesy of a Mr. Jackson Publick, we conclude with this image of the Venture Compound as it appears today: 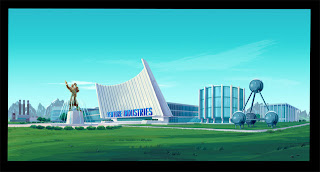