Because I'm a people person...

...and whore myself out for nearly every social networking site dangled in front of me, you can find me on ComicSpace. That photo is nearly a year old and doesn't really look like me anymore...but it was one of the less repellent ones I had available. Really seems like it cries out for a funny caption, though. Like "RAB tries to induce a moment of psychic nosebleed zen in himself by sheer concentration." Or "RAB enters the Zach Galifianakis lookalike contest." Or "Step away from the Interrositer, Doctor Meacham." Please feel free to suggest more captions in the comments section.

On a related note, my friend Mark from Northern Ireland writes to ask, "So, what didja think of ENDLESS WIRE then?" A fair question, young man, and one which in recent weeks has been much on my mind. I've been meaning to write something about the new Who album, and the reason I haven't done so is simply that I haven't decided what I think of it yet. And the weird part is, in the past year we've also had AERIAL from Kate Bush and LOVE from The Beatles, and I haven't entirely figured out what I think of those yet either!

A span of twelve months saw new releases from the artists who were the biggest formative influences on my musical tastes ever since I was a teenager...but none of these totally fulfilled my hopes and expectations in the way that a new release (or a remastering, in the case of the Beatles) would have done in the past. I have to withhold judgement a little because it might just be the misguided conservatism of the "true fan" who only wants his favorite artists to plow the same furrow over and over again, and complains when they go off in a different direction. Or it might be that they've lost the plot somewhere along the way and need a kick in the ass to get reminded of what made them great in the first place.

(With the Beatles album it's obviously a whole different question. I can't decide if I find the new versions too radical or too faithful to the original...but it's the one of the three I like the most, and Paul and Ringo kept their distance from it.)

Anyway, I have more to say about these albums, but perhaps I should save it for another post...
at 2:27 AM 5 comments:

Lisa at Sequentially Speaking posted about this and I've ranted about it there, but I've still got a bit of rant left in me and need to get it out of my system.

Back in July, the Skiffy Channel broadcast Who Wants To Be A Superhero? -- a six episode "reality series" so obviously scripted and contrived that the word "reality" itself might be able to sue the producers for defamation -- in which Stan Lee supposedly auditioned contestants who competed to become the new superhero featured in a comic book to be published by Dark Horse. Stan himself has real charisma on screen, and in spite of my contempt for the idea and the silliness of its execution, the show became one of my guilty almost-pleasures during its mercifully short run.

Months later, with the show almost entirely forgotten, Dark Horse has announced that the resultant comic book allegedly written by Stan Lee, originally due to come out in October, will ship in January. And they provide this cover preview: 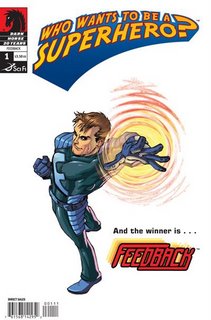 Logic says the cover should be a photo of the winning competitor. Not an awkward pose (and that is one seriously awkward pose there) on a white background! Even the shoestring budget of the the tv version managed to produce more interesting visuals, including a mockup cover featuring the character that was pedestrian, but still more interesting than this. And that mockup had the considerable benefit of actually having been shown on the program itself.

I have no idea what the ratings were on the series -- apparently high enough that a second series is being planned -- but let's assume that the show had genuine fans who, even at this late date, would still be interested in the comic promised by the very premise of the show. I mean, that's the presumed target audience here, right? So why not do everything you can to appeal to that audience and get their attention? By not using a photo of the guy, or the cover that appeared on the air, Dark Horse has possibly thrown away thousands in sales.

And what else is missing here? Stan Lee's presence was a big part of the show, and his name was prominently mentioned in all the publicity, and the comic is purportedly written by Stan. Anyone who watched that show certainly came away knowing the name "Stan Lee" if they didn't before. And his name doesn't appear on the cover? They passed up a chance to put the name "Stan Lee" in honking giant letters across the cover when it would have been entirely right and appropriate to do so? That's, what, maybe thousands more in sales lost right there.

(Some comics have blazoned a famous creator's name on the cover with less reason or even no reason at all.)

Let me make it clear that I had no interest in the comic itself; what bothers me is seeing something done poorly when it could just as easily have been done well. Dark Horse publishes a lot of good comics and has most of the best creators in comics available to them...and they've been very canny about integrating with other media for cross-promotion. To see them doing something this amateurish is disappointing.

This one's for comics fans who watch The Daily Show, which I assume is a fairly large overlap:

If they ever made a film version of American Flagg... 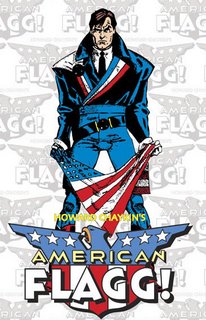 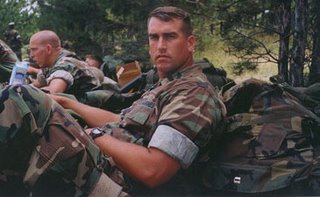 From the first time I saw this guy on the air, all I could think was "Holy crap, it's like he stepped right off a Howard Chaykin page!"

A secret power none of us can match

I've wanted to say something worthwhile about Dave Cockrum for days now...but I just can't find the words. So many things are caught up in this: the way in which Cockrum's career intersected with a shift in the way comics companies treated their creators...what comparing X-Men and The Futurians says about the challenges of creator-owned comics versus corporate properties...and what it says about the tension between comics writers and artists...why Cockrum's advent on the Legion of Super-Heroes and the X-Men had so much impact at the time...how much I loved those Superboy issues...how the death of a once-favorite creator makes me feel like a treasured part of my own life has just been put away in a sealed box, never to be opened again to prove that I'll never be able to go back to it again...

...and something about the condescending and inappropriate "Story Highlights" from the AP coverage, affirming every crass stereotype of comic books as kid stuff and comics creators as overgrown kids, though when I reread them in just the right skewed angle they reveal something oddly touching.

But do I really have anything worthwhile to add that hasn't already been said? Fortunately, Charles Yoakum does, from both the perspective of a fan who knows what Cockrum's presence meant in comics and the perspective of an artist who actually worked with the guy and got to interact with him. I don't know that I ever met or even saw Dave Cockrum in person, even at a convention; it seems like I must have, given the years of my convention-going coinciding with the peak of his convention appearances, but if so, why don't I remember it? Possibly I saw him and was too shy to say anything, not being able to find the words to convey what a big fan I was...which is right where I find myself now.

Grant Morrison has said in interviews that for him, Superman is more real than Grant Morrison: Superman existed long before he was born and will exist long after he's gone, and is known to many millions of people who'll never know the name of any of his writers. The same goes for DC and Marvel themselves. Characters like Nightcrawler and Storm and Colossus and Wildfire are more real than the tiny publishing houses which put out comic books featuring them. It doesn't matter that these characters owe their fame to commercial exploitation by publishers -- however they got out into the world, they're out there now, and they have an independent life in the minds of people all over the world. No action or policy by a publishing company can undo that. Those characters are effectively immortal. A company -- a collective entity of contracts and licenses and copyrights and marketing strategies -- doesn't create immortality, but a person can. Dave Cockrum, with his intuitive sense of what would catch the eye and work its way into our brains, was that kind of person.