It's nature's way of receiving you

First of all, thanks so much to all you guys who sent birthday greetings, either in comments to my previous post or by other means. I'm feeling shy and bashful now.

Tom Spurgeon said something a few days ago that made an old man very happy. I quote it here mainly so that I'll be able to find it again later when I need it, because we old folks are always forgetting where we put our bifocals and are scared of all these newfangled computing devices and whatnot. Responding to a particularly self-serving remark by a particularly snot-nosed comics scripting guy about the usefully productive lifespan of comics creators, Spurgeon opines:

However, if you allow yourself to define comics as something more than its leading edge in terms of monies received and pop culture currency obtained, it's clear that plenty of its creators do extraordinary work over the age of 45. Jack Kirby was older than that for his best period at Marvel Comics, and then went on to the very fruitful Fourth World period that by itself dwarfs the career output of all but handful of mainstream comics creators. The majority of the most popular MAD cartoonists were older than 45 during its 1970s flush period. Charles Schulz was older than 45 in the late '60s and the early '70s on Peanuts, its most popular and culturally relevant period. One of the best, most prolific cartoonists of the last five years, Gilbert Hernandez, was older than 45 during that astonishing period. I'd rather have all the Joe Kubert Comics made after he was 45 than the ones he made younger than 45.

One might also add that the productive years of comics creators might be longer on average if the major publishers hadn't been geared for all these years to actively drive out creators when they'd gained sufficient experience and maturity to stand up and refuse to accept being screwed. That may be a side issue compared with Spurgeon's point that seniority doesn't automatically equal cultural irrelevance...except that we can only wonder what other brilliant work we may have missed out on seeing because Marvel and DC were always ready to shove aside troublesome old folks in favor of new kids dazzled by getting their shot at the big time.

On the other hand, age need not bring wisdom either: leave it to Jim Shooter to go out on a sour note. I've been thoroughly enjoying Shooter's latest run on the Legion of Super-Heroes, just as I enjoyed his previous stints on previous incarnations of the Legion, and was sorry to see it ending. But when Shooter starts airing his complaints about his artist and his supposed lack of storytelling chops, he demonstrates a total lack of class.

I understand that Shooter's criticism is couched in the form of praise -- at one point, if read a certain way, Shooter is apparently suggesting Manapul might be the next Frank Miller, which he presumably intends as a compliment. But the tactful and classy thing to do would be simply to praise the guy and leave any critique for a more private occasion...especially in an interview which is all about the cancellation of a book. Don't leave the impression that he let you down and hastened the book's demise by not being good enough. But, for all that I've admired the guy's writing over the years, this is sadly typical of Shooter's defensiveness and self-justification...a tendency sometimes verging on the positively Nixonian.

The good news is that Francis -- who seems by all evidence to be a sincere, modest, and tactful person as well as one of the best new talents at DC today -- doesn't have to depend on Jim Shooter to vouch for him.

Update: Credit where credit is due -- Shooter acknowledges criticism for these remarks and tries to clarify them. It still comes across too much like "I'm sorry you took offense at something that wasn't offensive" for my tastes, but it's something.
at 7:33 PM No comments:

It turns out to be my 200th post on this blog, but it's also a special occasion here for another reason:

Birthday greetings today go out to one of my very favorite bloggers, the charming and talented and always entertaining Becca of the charming and talented and always entertaining blog No Smoking In The Skull Cave. And to Adam of the blog Movie Chunks, of whom I was previously unaware until today but I'm sure will become a great favorite of mine in due course.

Though the personal significance of this day may often be overshadowed in the public imagination by events like the Feast of St. Crispin and the Battle of Agincourt as well as the birthdays of Pablo Picasso and Minnie Pearl, it is nonetheless extra special to us. May you both prevail over all those who scorn and mock you, and see your enemies driven before you in the dust, begging for mercy which will never be granted as the unstoppable force of your conquering armies march ever onward to victory over those who dare defy --

I was surprised to discover in yesterday's Doonesbury that my former hometown has achieved fame as an exemplar (at least for one cartoonist) of the small-town values held up by the likes of Sarah Palin as "the real America." It's a surprise because I know from personal experience that that town is actually built on top of an ancient hellmouth and controlled by sinister, malign forces who plot the downfall of all humanity. Sort of like Twin Peaks or Sunnydale or Smallville, except without the plucky young people to save the populace from eternal damnation at the mercy of unspeakable nameless things who delight in pain and torment.

In a cruel twist, it's also home to one of the best restaurants I've ever been to in my life. That kind of sucks. You have to enter this vile place of horrific torture to reach this spectacular meal. Still, worth it if you like really excellent Italian food.

Unless he meant the one in Oklahoma (which turns out to be named for the same person) because that place is nowhere. What a dump!
at 1:13 AM 1 comment:

Written in the eaves 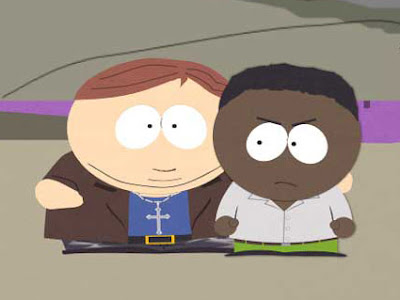 And in breaking news...

NEW YORK -- Popular indie rock band Vampire Weekend today issued a statement asking that Senator John McCain refrain from using any of their songs in his campaign, in case he was thinking of doing so at any time in the future. A spokesperson for the band explained, "First it was John Mellencamp, then it was Heart, then ABBA, then Jackson Browne, then Van Halen, and now the Foo Fighters. The band thought it would save a lot of time to make it clear at the outset that permission to use their songs would not be granted."

Following up on this development, fellow indie rockers Death Cab For Cutie subsequently issued a companion statement, declaring "Let's nip this one in the bud right now and spare everyone the trouble of calling their lawyers, okay? Don't use our songs either."

Garage rock revivalists The Strokes, currently preparing to release their fourth studio album sometime after the inauguration ceremonies in 2009, also issued a statement indicating their back catalog was henceforth to be considered off-limits to the McCain campaign.

In response, the McCain team dispatched operatives to all forthcoming campaign stops to verify that all background music played during personal appearances by the candidate and his running mate Gov. Sarah Palin will consist exclusively of music by Ted Nugent, Pat Boone, John Rich, and "anyone else who didn't expressly and specifically tell us not to."

Senator McCain (pictured above with Senator Barack Obama during their debate at Belmont University in Nashville, Tennessee on October 7, 2008) was unavailable for comment.