What follows is more than a bit silly and may only make sense if you read this first. For maximum effect start at the linked entry and go forward chronologically. In fact, you should probably just be reading that blog anyway, because it's really good.

Anyway, taking the statement "...you guys should really be writing Scale Guy, not me..." as an official request, I offer a piece of fan fiction celebrating one of the most unsung heroes of comics art. We should not take him for granted when he offers us so much.

THEY ALSO SERVE WHO ONLY STAND

"Stand here for one moment."

Scale Guy walked over to the prototype and stood next to it where the general had indicated. The technician (whose waistline was one and one-half the width of that of Scale Guy) and the general (half a head shorter than Scale Guy) looked from the prototype to Scale Guy and back again repeatedly. Scale Guy was used to the darting glances. People often did that around him.

"Yes, there, you see?" announced the general at last, waving his arm at the prototype. "The doorway does need to be slightly higher, as I said. Otherwise our taller soldiers will need to stoop over slightly as they pass through the dimensional threshhold..."

The general and the technician walked away, deep in conversation, forgetting Scale Guy was still there. As people usually did.

It was the peculiar fortune of Scale Guy to be precisely average in both height and weight throughout his entire life, the embodiment of the perfect median of the population for his age group. He had been a statistically average baby, an unexceptional teen, and an utterly common adult.

Over the years he had developed a slight tendency toward weight gain. At first he wondered if this mild paunch would make him more distinct, more individual...but then he learned that due to an increase in the average body mass index of adult males in his age group, he was still (and would always be) perfectly average.

But he was the best there was at what he did, and what he did was demonstrate relative size.

"We stand gathered here in William Foster Memorial Park to dedicate this monument to a fallen hero..." As the politician continued his oration, those in attendance at the dedication ceremony looked up at the towering statue of Bill Foster and then looked at Scale Guy briefly before their gaze returned to the memorial statue. Scale Guy thought this must be what the crowd at a match looks like to a tennis player.

No one there knew Scale Guy, and he was not invited to speak. Scale Guy knew no one cared if he had anything to say about Bill Foster, or whether Scale Guy had preferred the name Black Goliath or Goliath or Giant-Man. They wanted Scale Guy around for one reason: so that all present could say "Yes, it certainly is a big statue we've built. Look how big the statue is compared to that average fellow over there. The size of the statue shows how much we honor the memory of Bill Foster."

It was a big statue, though not quite as big as Foster had been when he died. Scale Guy noticed things like that.

That's very big of you. Don't be small about this. We'll keep you on standby. He'd heard them all.

"The Minister is deeply concerned about the possible threat from infiltration of military assets by terrorist organizations via the use of homebrew Pym particles. What strategies have MI-13 developed to address this threat?"

The agent gestured to Scale Guy, who held out his open hand for inspection. "Miniature weapons," she explained, "for use by miniature troops deployed in response to psychic detection of miniature brainwaves at key locations."

The assembled Defence officials peered into Scale Guy's palm to examine the flamethrower, the rocket launcher, and the submachine gun. There was no doubt these were indeed miniature weapons: everyone could see it plainly. They were like trinkets from a charm bracelet in Scale Guy's perfectly ordinary-sized hand.

Afterward, as they left the Main Building, the agent tried to make small talk with Scale Guy. "I went back to my childhood home this weekend. Hadn't seen it since I was twelve. I couldn't believe how small it was."

Scale Guy smiled politely, but inwardly he sighed. A place was the size it was. It didn't change just because someone looking at it became bigger or smaller. Why didn't people see?

He'd tried to join the Avengers once.

Luke Cage stood next to him in front of a mirror and studied their shared reflection. "Not bad...not bad at all. With you standing there, everybody can tell I'm not someone they should mess around with. Of course, everybody knows that already."

Wolverine looked up at Scale Guy and said "Stay the hell away from me."

Alarm klaxons sounded but Scale Guy could barely hear them over the crashing of machinery. Injured staff moaned with pain. The staging area began to fill with smoke and flame.

"Enough!" shouted the Reaver. "No more resistance! Your soldiers have been dispatched as easily as lead toys, and your superhumans are nowhere to be found!" It was true. The most powerful heroes of the British Isles were away facing Dormammu; the others could not arrive soon enough to stop the intruder. "Now turn over to me the secret of your dimensional threshhold generator! With its power to eliminate distance and reach the furthest barriers of space, I shall conquer this world and raise here a mighty army to subdue the cosmos entire!"

"Er...excuse me." Scale Guy stepped forward out of the chaos, speaking slowly and calmly. "But have you really considered the magnitude of what you propose?"

"What do you mean?" the Reaver asked.

"Well, conquering the world...that's over six billion six hundred million people. Spread across a globe with a diameter of twelve thousand kilometres and a surface area of 510 million square kilometres. Logistically speaking, that's a nightmare. And all those people have to be housed and clothed and fed, not to mention trained if you want them to be an army. But really, more of them will have to be farmers and factory workers than soldiers. And they'll need communications and support systems. Did I mention doctors and nurses? By the time you rule the entire world, you'll be spending so much time on management and administration you won't be able to concentrate on anything else.

"And that's merely one world. There must be countless habitable worlds, and you'd have to do the same for all of them. Not to mention the logistics of communication and transportation. You'd become the manager of a crushingly huge galactic bureaucracy that would become unbearably slow, and spend your days putting your seal on their forms and filling out paperwork dealing with alien races you'd never even see. Your days eaten up with the tedium of managing the spoils of conquest, and it would just go on and on..."

And as he said this, Scale Guy stood there. He stood next to the Reaver.

Next to the entire world.

Next to the galaxy and all its neighbor galaxies and the teeming universe beyond.

The Reaver blinked, realizing how small he was in relation to an eternity of paperwork. "You...you're right. My ambition was far too grandiose. No lone individual could ever truly subjugate the entire universe. It's so vast...!

"Far better I devote my energies to taking only what I need to live in unrivalled splendour whilst my raging ego is soothed by incessant praise. Without a troublesome cosmos to tend and administrate, I shall be able to enjoy pure material comforts free of distraction.

"I have no need of the dimensional threshhold. Truly, there are infinite reaches to conquer within my own mind. Thank you for giving me this new perspective!" the Reaver shouted to Scale Guy before he flew off into the distance. In the relative quiet that followed, as fire control extinguished the smouldering wreckage, the staff of MI-13 looked in amazement at Scale Guy.

Hearing the acclaim and congratulations of his coworkers, Scale Guy realized his own problems weren't so big after all. You had to keep things in proportion.
at 3:58 PM 2 comments:

The moth, the snake, and the stingray 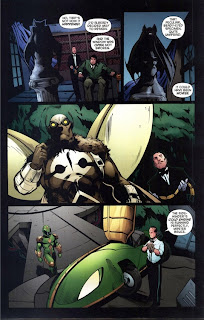 Batman #682 by Grant Morrison and Lee Garbett includes in passing an understated sequence in which Alfred speculates on other guises Bruce Wayne might have taken had something other than a bat come through his window that fateful night long ago. Had a moth flown in, we might have a Mothman instead of a Batman. Or Bruce might have mused "My actions must be swift and decisive, my approach silent and undetected...' just before his eye was caught by the stuffed and mounted snake on his bookcase. "That's it! I shall become...a serpent!"

This plays on an idea Morrison has toyed with during his run on the series: the idea of Alfred as a Batman fan, someone who delights in the character to the extent of writing his own Batman fan fiction and imaginary stories...and who might even be vicariously living out his own desire for two-fisted action through the travails of his employer. That idea certainly didn't originate with Morrison, but he's used it to good effect.

Another thing Morrison has done is to incorporate bits and pieces from every era of Batman, taking the position that no story is so ridiculous or inappropriate it needs to be written off completely; that with some judicious reinterpretation, the entire 68 year history of the character can be read as the internally consistent life experiences of one individual. Use every part of the animal: Bat-Mite, Kathy Kane, Man-Bat, Ras al Ghul, it all goes into the mix. And the above sequence reminded me of the following item from Batman #256 (May-June 1974), written by Martin Pasko (with considerable snark, one feels) and drawn by Pat Broderick. 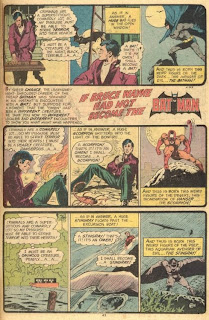 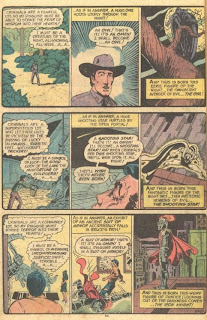 One can only ponder the crime-fighting effectiveness of the Iron Knight. (Full marks for intimidation value, but how many getaways would have been aided by the armored hero clomping towards them very...very...slowly?) And Aquaman would probably have been pissed off at the Stingray horning in on his turf. Anyway, I'm sure GM remembered this mini-featurette and I suspect he knowingly alluded to it with the above scene.

Thanks to commenter Frank at Final Crisis Annotations for providing the issue number, enabling me to track down the issue and present these scans here. I thought non-Korean readers might want to enjoy it for themselves. (Props also to Jidol for making it available to Korean readers...)
at 2:12 AM 13 comments: Death-Man was created by Bob Kanigher and Sheldon Moldoff in Batman #180, cover dated May 1966. The character was not created by Bat-manga artist Jiro Kuwata. I don't know if the change in his name to "Lord Death-Man" was an accident of translation (in either direction) or a deliberate choice by Kuwata, but it definitely sounds better.

I don't expect some new guy at Newsarama to know something as obscure as this, and I have no idea if Chip Kidd or Saul Ferris know it or whether they attribute the character's origin correctly in the text of their Bat Manga! collection. But someone, somewhere, needed to point this out, so here it is.
at 6:47 PM 4 comments: