Blast from the past

I'm sorry, but other than a surprisingly decent Superboy, these guys look terrible. I assume they were trying to capture some of that rakish Teen Titans quasi-anime mojo but instead they took a left turn and veered off into Ugly Town.

For that matter, you have to wonder how the cartoon will get away with featuring Superboy so prominently, in the wake of the recent court ruling that the television series Smallville may infringe on the copyright held by his creator's wife and daughter...and that show doesn't even refer to the character as "Superboy." So wouldn't the same concerns over possible copyright infringement apply here? DC only just got finished getting rid of the two remaining characters they had named Superboy, and the current Legion comic now features Supergirl.

Personally, I don't understand why the different divisions at Warner can't coordinate their activities a little better: either have a "Legion of Super-Heroes" cartoon without a Superboy or Supergirl...or, better still, make the cartoon "Supergirl and the Legion of Super-Heroes" for greater consonance and cross-promotional possibilities with the print version, not to mention a girl-positive lead character.

(And if you say a teenage girl cannot be the lead action hero in a cartoon series that appeals to boys, I shall have to ask you to step outside.)

Ah well. As a reward for putting up with my fevered rantings, here's something nice to look at, courtesy of Robby Reed at Dial B for Blog: 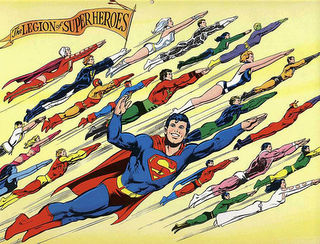