No point at all 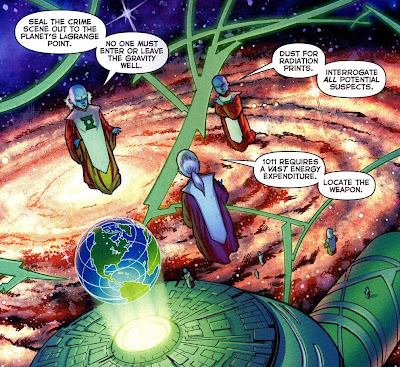 From the evidence of Final Crisis #1, it seems Grant Morrison doesn't know what a Lagrange point is.

Lagrange points (or libration points) are areas formed by the orbit of one body around another, positions in which gravitational forces are balanced so that things put at those points tend to stay there, relative to the other bodies of the orbital system. A celestial body by itself doesn't have "a Lagrange point" as such; you need two bodies in an orbital relationship. There isn't one Lagrange point in such an orbital system but five of them, all moving with the orbiting body in fixed relationships. This diagram should make it clearer than words alone could do: 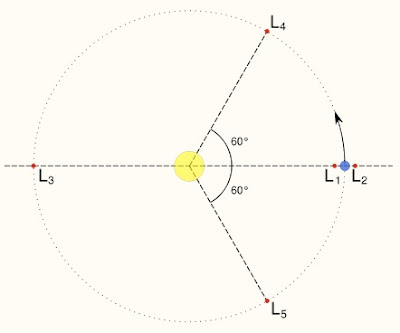 Morrison seems to get that "Lagrange point" has some relationship with a planet's gravitational field, but the term doesn't quite make sense the way he uses it here. (He might instead have used a term like "the Lagrangian zone" to indicate "a spherical zone as far away from the planet as its Lagrangian points" or "out to the Trojan points" which is a more colloquial term for the L4 and L5 points.) The subsequent lines about "no one must enter or leave the gravity well" and "dust for radiation prints" are equally senseless for different reasons, except to reinforce the conceit of this being a cosmic police procedural, and to tip us off that none of this should be taken seriously.

It disappoints me when a writer I otherwise admire immensely devotes time and attention to promoting crackpot pseudoscientific drivel, Whitley Strieber UFO abduction books, and supposed Mayan astrological forecasts while not knowing real scientific concepts and terms. It's okay for him to throw in a misused word just because it sounds sciencetastic. After all, who would know what a scienceish word actually means? Unless you were a practitioner of scienceism or something.
at 12:23 AM